Manchester United labored to a slender 1-0 victory over West Bromwich Albion in their Saturday afternoon fixture. In a hotly contested game, United came out on top thanks to a Bruno Fernandes penalty.

United dispatched Everton at Goodison Park in their previous game and were hoping to replicate their form in the home games as well. West Brom were seeking their first win of the season, and their hunger and desire to win certainly made some United fans nervous.

Ole Gunnar Solksjaer made some tweaks to his starting lineup due to injuries and fixture congestion but the overall strength and structure of the squad remained consistent. David de Gea was in the net with Lindelof and Maguire at center back. Wan Bissaka and Alex Telles started on the wings. Matic and Fred were the holding midfielders as Bruno, Rashford, Mata, and Martial played in the attack. Mason Greenwood and Pogba were nowhere to be seen, and Donny van de Beek and Cavani started on the bench. 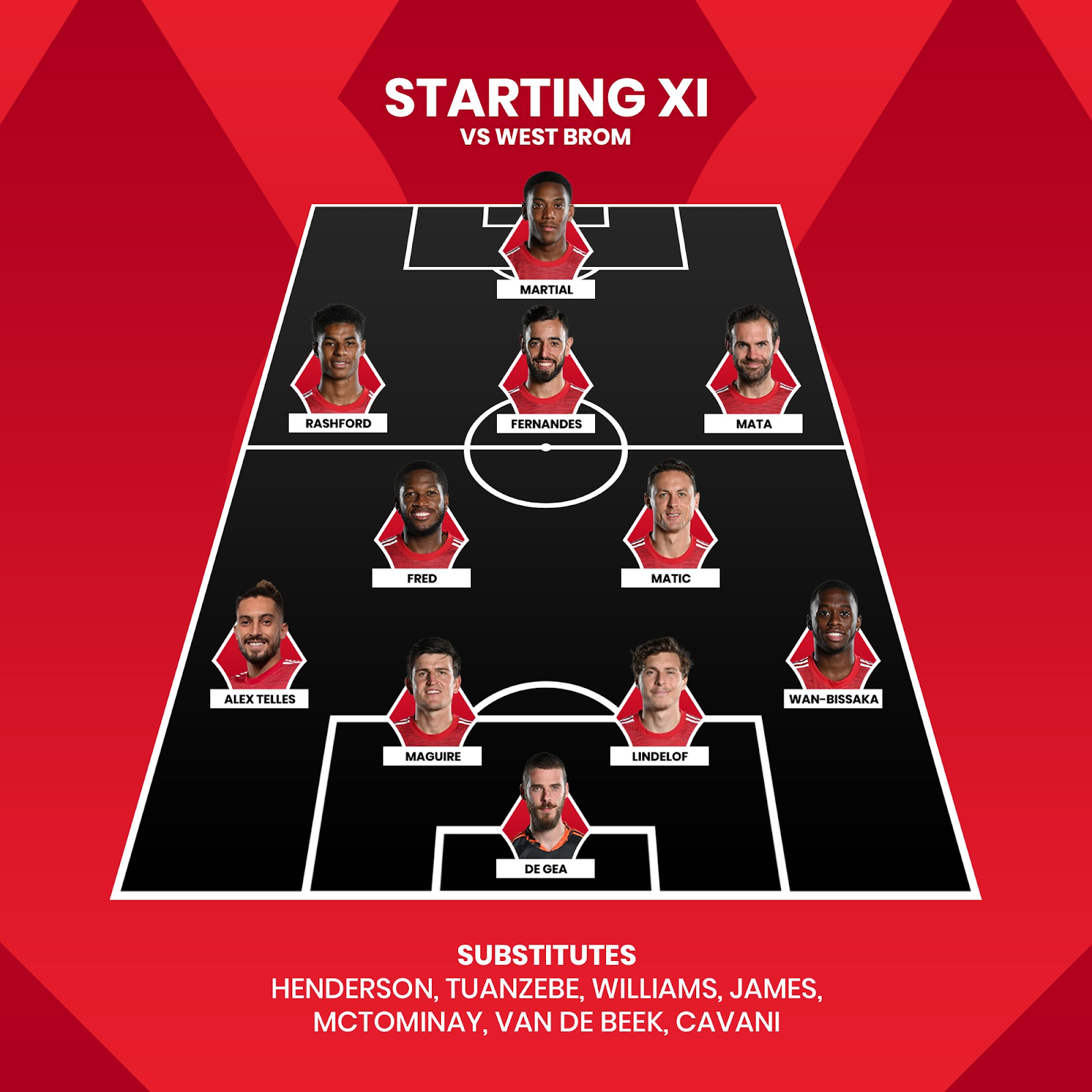 United started the game by applying pressure on West Brom looking for the early breakthrough. Alex Telles’ attacking abilities on the left came in handy as he combined well with Rashford to create some chances. Unfortunately, West Brom’s defense was able to negate United’s attempts relatively easily. Much like many other teams, West Brom’s strategy was to defend deep and then try to counter.

As the Baggies grew into the game, the passing and tempo slowed down significantly. Rashford and Martial started off well as they made some good dribbles and hold up plays. In the 34th minute, Mata squared the ball to Martial who had an easy chance to put it away, but the West Brom goalkeeper pulled off an excellent save to deny the Frenchman. In a generally uneventful first half, United had more chances and threatened more, but a lack of clinical-ness kept the scores level.

The second half started very unceremoniously for United as Bruno Fernandes’ tackle on Gallagher was deemed a penalty by the referee. However, VAR intervened and overturned the call to give Ole’s men a sigh of relief. To add insult to injury, the referee pointed to the spot on the other side of the pitch shortly after. However, Johnstone palmed Bruno Fernandes’ penalty away to deny him. VAR intervened again and the penalty was retaken. Bruno Fernandes did not miss the second time as his shot found the back of the net and put United ahead 1-0.

Somehow United were ahead but the game was far from over as West Brom began to push ahead instantly. In the 76th minute, Bruno played a brilliant long pass over the Baggies defense to find Rashford but the move fizzled out. More passes and runs like that would have been crucial to score more and put the game to bed, but United’s shambolic finishing and coordination could not muster a cushion of goals.

United were expected to counter attack and put the game beyond West Brom but Johnstone saved everything that United threw at him. The ex-United academy lad put on an impressive display against his former employers. As the final minutes approached, the game became very end to end and United had multiple passes into the opposition half that could have resulted in goals. However, the attacking ruthlessness was missing among all of United’s players.

In order to play out the game and secure the win, Ole replaced Rashford with Donny, and Fred with McTominay. United’s defense held firm against West Brom but the final few minutes were very nervy. The final whistle could not come a moment too soon as the Red Devils secured the win in a slow, and difficult game. Slaven Bilic’s men will look for their first win elsewhere, as Ole will now turn his attention towards the fixture against Istanbul on Tuesday.

About Deep Chadha 47 Articles
Hi, my name is Deep and I have been a Manchester United fan since I was 10 years old! This club means everything to me and I have spent many late nights and early mornings watching games, and then re-watching highlights. Hoping to see #21 in our trophy cabinet soon! GGMU