New season, same struggles. Manchester United came back to Old Trafford with a mindset as though they were still on holiday. Whether it was the shortened pre-season or the negativity surrounding the lack of transfer success, the Red Devils were out-performed on Saturday’s season opener against Crystal Palace. 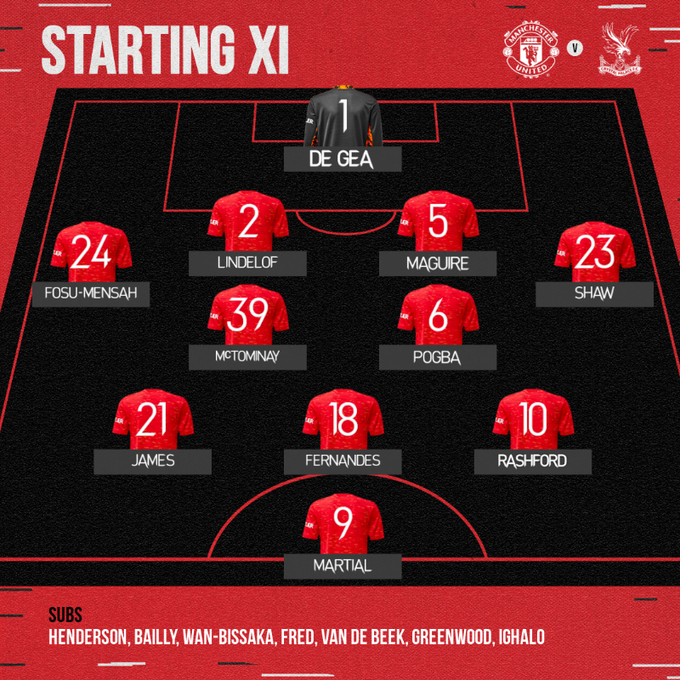 As was widely speculated, OGS chose to run out with the same 4-2-3-1 formation that was key to the revival at the end of last season. We saw many of who we expected in the starting XI including Shaw, Maguire, Lindelof, Pogba, McTominay, Fernandes, Rashford, and Martial.

The surprises came from who he had manning the right flank of the squad. Daniel James getting the nod at right wing and with Timothy Fosu-Mensah at right back. McTominay over Matic was a mild stunner but not as great as the previous two.

Surprises for sure but should have been enough to get the job done against Crystal Palace. These lineup surprises may be due in part to Mason Greenwood being involved in a little drama over the international break or Aaron Wan-Bissaka not being fit enough after his quarantine.

Also, could be due to trying to prepare for the upcoming number of fixtures in a short period of time, either way the performance was more than underwhelming.

The match immediately got off on the wrong foot for Manchester United, with De Gea struggling to pass out of the back (stop if you’ve never heard that before), almost leading to a Palace goal in the 6th minute. Shortly after however, Palace were able to get their opener in the 7th minute, with a low cross to the back post finding Andros Townsend after some poor defending.

The first 20 minutes were played seemingly entirely in the United half with Crystal Palace as the obvious aggressors. United lacked a drive to push forward and were just looking to absorb the pressure and counter. The remaining 25 minutes of the first half were much more balanced with the Red Devils getting a firmer grip on the match.

Down 0-1 at half is not what you want to see from your season opener at home but it was not catastrophic. OGS looked to inject some offense into the squad by bringing on Mason Greenwood at half.

While the offense seemed to come alive, the lack of finishing quality also translated from the end of last season. Greenwood header, miss, McTominay header, miss, Lindelof strike, miss. Creating pressure was a positive sign but at the end of the day the lads need to put the ball in the back of the net.

Another substitution came in the 67th minute when Paul Pogba made way for the much anticipated debut for Donny Van De Beek. The excitement was short lived, sadly, due to VAR confirming a handball on Lindelof in the 69th minute. After de Gea actually saved the penalty, VAR forced a retake because of a miniscule line infringement; Wilf Zaha promptly put away his chance to double the Palace lead.

Then, like fate, the debutant, Van de Beek was able to corral a lose ball and tuck it into the corner to put United back into the match in the 80th minute. The fire he showed after scoring the goal, knowing we needed more, was seemingly the only bright spot for United on Saturday.

OGS then tried desperately to find an equalizer by bringing on Ighalo FC, Odion Ighalo for Fosu-Mensah in the 81st minute. And just as fast as hope was restored, the final nail was put into the United coffin when Zaha found the bottom left corner from the top of the box to make it 3-1 Palace and rewarded them all 3 points.

Although the overall performances from the players was not truly poor, it overall was not good enough. There was a lack of creativity which needed from Fernandes, Pogba giving the ball away lazily in the back end, Rashford still not looking like himself, and De Gea still struggling to play out from the back.

It was not the kind of performance we wanted to see after watching our rivals spend money and get results in their first two weeks of opening the season. The one bright spot for United today was the debut and play from Donny Van de Beek. Besides his debut goal, he was in control of the midfield, making box-to-box runs, and seemingly knowing where to be at all times.

All the players and coaches will say the right things that this is embarrassing and not good enough, but all that matters is the next game. We are in a result based sport, results are required.

Next up, Tuesday September 22nd against Luton in the English League Cup.